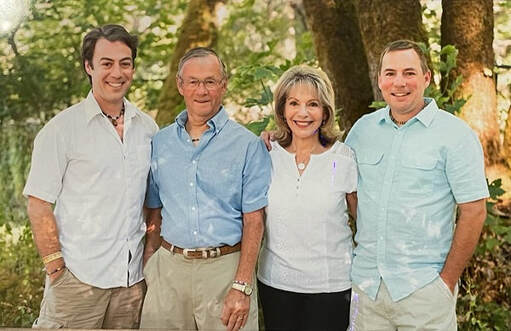 The Parade Committee is deeply honored to announce the 2021 co-Grand Marshals for the Bend Christmas Parade are Gaye Gilpin and her two sons. The Parade was a labor of love for Ernie Gilpin for nearly 30 years. It’s only fitting that his wife and sons serve as this year’s co-Grand Marshals as we honor Mr. Gilpin’s dedication and years of service to the community.

As co-Grand Marshal’s of the 2021 Bend Christmas Parade, we are proud to honor the legacy of Ernie Gilpin, who passed away in December, 2020. Ernie was the Chairman of the parade for 27 years. He is
survived by his wife, Gaye, and two sons, Scott and Jeff.

The Gilpin family has been involved with putting on Christmas celebrations and festivities for over 40 years. Starting back in the 1970’s, when Scott and Jeff were very young, Ernie and Gaye organized neighborhood Christmas parties, complete with unique themes, skits, sets built in the garage, and surprise appearances by Santa Claus, always arriving in a unique way. One year Santa appeared to have parachuted into the back yard!

After retiring in 1992, Ernie and Gaye knew they wanted to give back to the Bend community. They became volunteers at St. Charles Medical Center, Community Theater of the Cascades, Gramma’s House, the Ashton Eaton Parade, and of course, the Bend Christmas Parade. Their love for celebrating Christmas in a fun and public way continued into assisting the Bend volunteer committee that has put on the parade for 30 years.

Ernie used his organizational skills honed from a distinguished career as a 6th-grade school teacher to find ways to make the parade run smoothly for entrants and spectators alike. Year-round it became a part-time job for Ernie and Gaye, and a full-time job in the few months leading up to the parade. Scott and Jeff were heavily involved in the parade all year long, as well.

Ernie’s passion and commitment to the parade was contagious, and along with the 12 committee members, his goal was to put on a quality Christmas parade that the entire community could participate in and be proud of. A big thank you goes out to those committee members for all their hard work and support over the years in helping to make the parade successful.

Gaye, Scott, and Jeff are honored and humbled to be selected as the 2021 co-Grand Marshals. What a wonderful tribute it is to be able to celebrate Ernie, his legacy, and all his contributions to the Bend Christmas Parade!